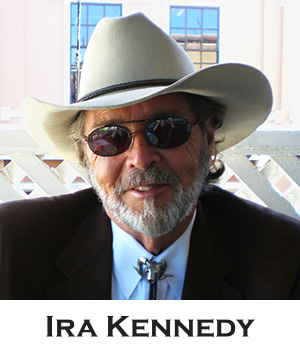 Born in a tent near San Saba in 1941 as the son of migrant workers, Ira began his artistic career in New York City where he held two solo exhibitions and participated in the group show, "The Art of Money", with Andy Warhol and other notable artists in New York's Chelsea Gallery in 1969.

Artists of the past have had sudden shifts in their artistic style.  Picasso’s revelation came once he saw African art, and Van Gogh’s discovery of Japanese art was equally life-changing. Likewise, around 2005, Ira’s exposure to Australian Aboriginal art, the native arts of  Mexico and the ancient rock art of the Southwest Indians came together to evoke an artistic epiphany.

”I have chosen to paint what can’t be seen. It's not the color I see, it is the color I feel. Not just the shape, but the shapes' meaning. Not the composition but the harmony. The rhythm of dots throughout the painting create an overall visual field which conveys a sense of wholeness, alive with the movement and shimmer of life. My work is to be sensed more than viewed. The paintings are not an object for the eye alone, but an experience for the mind —intimating, not imitating, that which is indescribable.”

His paintings are held in private collections from Australia to Texas and from Canada to South Korea. His original work is currently available only by commission.